Our research is to build and apply novel multi-modal neural interfaces to understand how the brain works, pathological mechanisms, and to improve treatment of debilitating neurological disorders.


Much of this work I started in the labs of Dr. Ann Graybiel and Dr. Michael Cima at MIT.

Working with a team of talented students, post-docs, and scientists, and a number of multi-disciplinary collaborators is integral to advance this research. 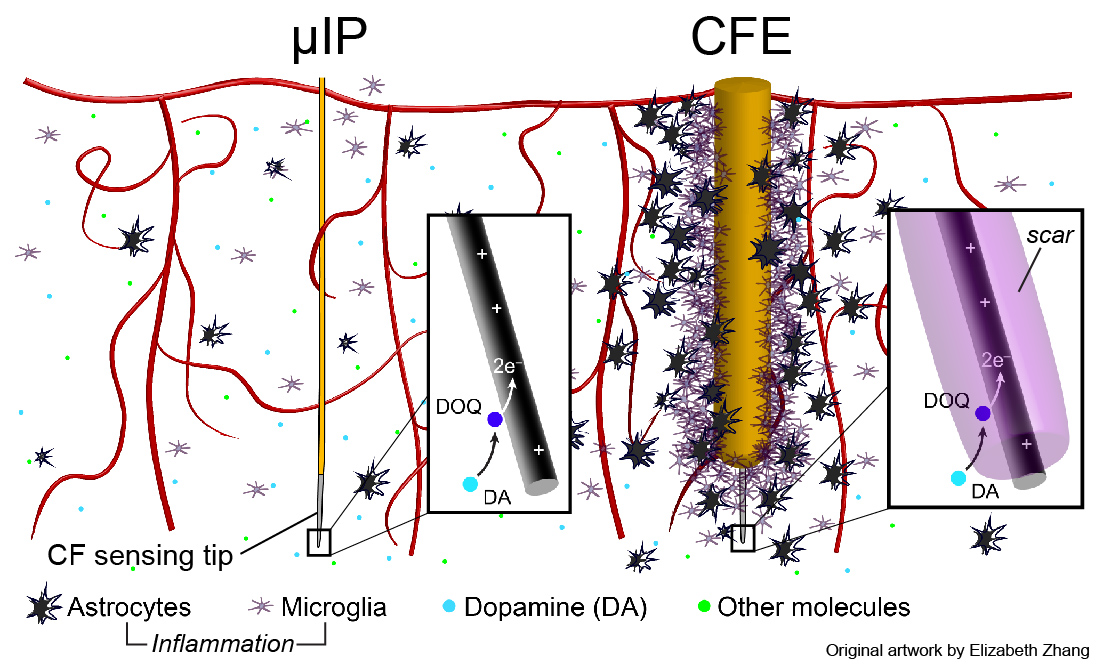 The micro-invasive probe (µIP) is ~the size of a neuron with a diameter < 10 µm, and 10 times smaller than state of art, CFE, neurochemical sensors. The reduced size reduced inflammation.

The µIPs are fabricated by encapsulating 7 µm diameter carbon fibers (CFs) with a conformal layer of parylene (<1 µm).

Inflammatory response is significantly reduced around the µIP in comparison to standard CFE sensors in terms of the expression of astrocytes (GFAP), microglia (Iba1), and blood brain barrier permeability (IgG). Very little difference was observed between the µIP implanted brain and unpenetrated brain.

The ability of implanted probes to record dopamine neurochemicals has been shown to degrade over time (amplitudes and rate of detected signals decreases over time) [Schwerdt et al 2017].

The micro-invasive probe (µIP) provided longitudinally stable monitoring of dopamine (sensitivity was uniform across time and the recorded amplitudes did not show a significant trend over time).

Sensors capable of chronic use in primates are essential to understand dopamine function in behavior and to provide viable diagnostic methods for detecting and targeting treatment for Parkinson's disease and other neurological disorders.

We developed systems capable of monitoring dopamine over several months in the nonhuman primates as a step towards facilitating translation to humans. 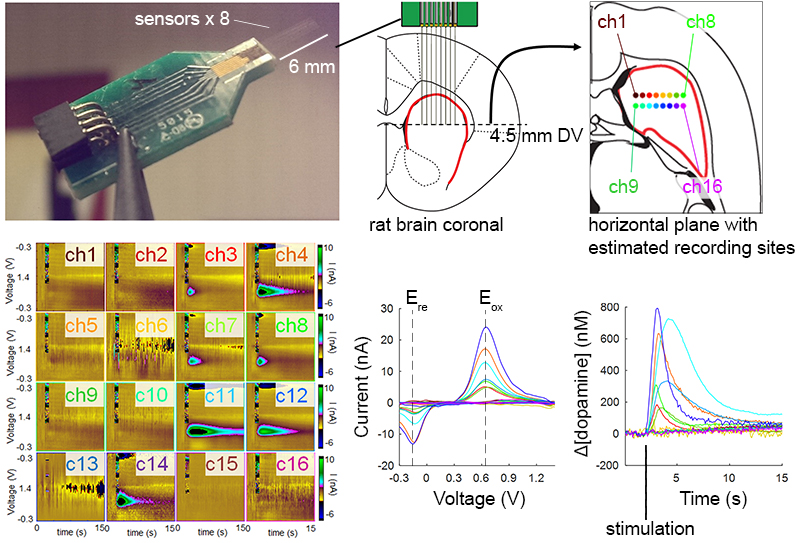 Most neurological disorders stem from chemical dysregulation at specific brain sites. Understanding the site-specific changes in dopamine signaling is crucial to elucidate the basis for many diseases, including Parkinson's disease, major depressive disorder and other mood disorders, and many other debilitating conditions.

We developed micro-arrays capable of measuring subsecond dopamine release from a wide distribution of sites in the brain and found highly heterogeneous dopamine dynamics in the rat striatum.